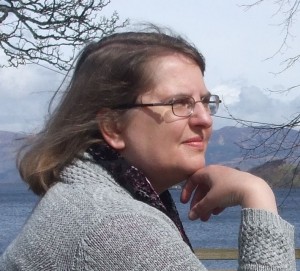 I was born in Glasgow in 1968, and I’ve lived in the west of Scotland throughout my life.
I attended school in Greenock. By the time I finished secondary education, I played the French horn and what I wanted more than anything was to be an orchestral musician. Or better still, a soloist. I loved horses.  And I wrote. Insatiably.

I’d assumed I’d go to music college, but university was recommended instead, because – my French Horn tutor said – I wasn’t single-minded enough to be a musician. At this time, I still fully intended to take up music as a career, but in second year, quite by accident, I discovered archaeology. I graduated a couple of years later with an MA in Archaeology, and went on to do a Ph.D. at Glasgow, specializing in the Late Bronze Age metalwork of Essex and Kent.

Throughout this period, I kept on writing. Science fiction, because that’s what I liked reading. Most of the time, I wrote as an antidote to studying, and what I enjoyed writing most was fan fiction, set in the Star Wars universe, though back then, writing fan fiction was something you wouldn’t admit to in polite company!  My close friends, who were all Star Wars fans, understood this, and encouraged me, though everyone else thought I was quite mad! Some of these friends were writers themselves, and it was through them that I had my work published in a number of fanzines, including Imperium and A Tremor in The Force. I even circulated some longer pieces myself. A few examples of my work can be found here, courtesy of Moonlight Fiction

Groundstaff Blues was given a Best Short Story award in the mid 1990s by readers of the Star Wars letterzine Southern Enclave…
Somewhere in the midst of all this, I managed to squeeze out a mainstream science fiction story, Busman’s Holiday, which came first in the 1988 Glasgow Herald/Albacon New Writings in Science Fiction competition. Its original success can’t have been a fluke, for it’s since been republished on three separate occasions, in a variety of publications, including a science fiction anthology, an educational textbook, and a history of the Clydeside Scottish Bus Company!

I knew all along that the Star Wars stories were an apprenticeship of sorts, but what they were leading to, I had no idea. I presumed that eventually I’d write science fiction, because that’s what I’d always consumed as a reader. But writing remained a hobby. I wanted to be an archaeologist, and that’s exactly what happened.

Archaeology’s a curious profession; it’s very hard work, and in a commercial environment, it can be very trying. But all in all it’s immensely satisfying. It’s quite a privilege, to have such intimate contact with fragments of other peoples’ lives. Other people long dead, whose whole life experience survives only as a few artefacts or as scribbled words on a manuscript.

With such a background, perhaps it’s not surprising that I finally found myself writing historical fiction. And more to the point – historical fiction set in Scotland. As the old saying goes, always write about what you know. And after twenty years spent immersed in the history and archaeology of the west of Scotland, I think I can claim that it’s familiar territory. My working environment feeds the muse, of course. All the time, I’m snatching glimpses into vanished lives. New connections are made, new avenues become apparent.
And with such mental grist pouring thick into the mill, there’s only one way to respond, of course.
I just keep on writing. Incessantly.

Louise’s debut novel, Fire And Sword, will be published by Hadley Rille Books in September 2013.