On the 11th June 1488, two armies meet in battle at Sauchieburn, near Stirling. One fights for King James the Third of Scotland, the other is loyal to his eldest son, Prince James, Duke of Rothesay.

Soon James the Third is dead, murdered as he flees the field. His army is routed. Amongst the dead is Sir Thomas Sempill of Elliotstoun, Sheriff of Renfrew, whose son and heir, John, escapes with his life.

Once John’s career as knight and courtier seemed assured. But with the death of his king, his inheritance is fragile. He’s the only surviving son of the Sempill line and he’s unmarried. If he’s going to survive, John must rely on his wits and try and win favour with the new king.

But how can he do this, when he’s just one minor baron in a land which is descending into violence as old feuds are stoked by a succession of grudges and grievances? One such feud is escalating between the Sempills’ allies the Cunninghames, and their rivals the Montgomeries, led by their hawkish, uncompromising leader, Hugh, Lord Montgomerie.

Montgomerie’s star is in the ascendant. He’s been richly rewarded for the part he played in helping James IV ascend to the throne. A chance meeting with Montgomerie makes John realise that Lord Hugh will do much to ensure that the Sempills stay out of the feud. In fact, he’s good enough to warn John that his lands and titles are coveted by a powerful coalition of local magnates, led by John Stewart, Earl of Lennox and his son Matthew Stewart, Lord Darnley.

But Montgomerie is himself a kinsman of the Stewarts, and – worse still – the last recollection John has from the battle was of his father and Hugh Montgomerie locked in combat. How can a man with Lord Hugh’s dubious reputation be trusted to help restore the Sempill family’s fortunes? And how can John hope to remain neutral in the dispute between the Cunninghames and the Montgomeries? Is it just a matter of time before the Sempills get dragged into a much wider and more bitter dispute that threatens to tear the Westland apart?

Fire And Sword Will be Published by Hadley Rille Books on 27th September 2013. In the meantime, you can read an extract here. 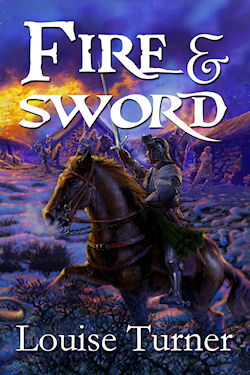 Discover the story of John Sempill, baron of Renfrewshire, as he fights to defend his inheritance after the murder of King James III...

Goodreads reviews for Fire and Sword