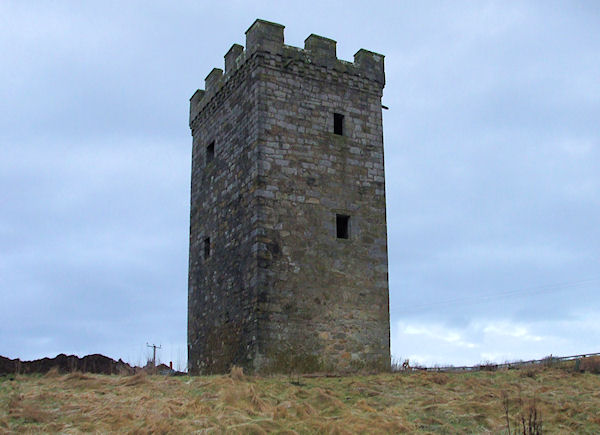 Seen from the Lugton Road near Uplawmoor in East Renfrewshire, Caldwell Tower forms a prominent landmark in the landscape. But its imposing appearance is deceptive: tower-houses were often seen as providing cramped and inconvenient accommodation by the early modern period, but even by these standards Caldwell Tower seems unusually small. It therefore seems unlikely that it could ever have functioned as a place of residence for a baronial family and their household staff.

Caldwell Tower has been interpreted by some authorities as a free-standing tower of probable 16th century date which once formed part of a much larger castle. It may, for example, have formed part of a much larger encircling curtain wall. But as yet no evidence of any such structure has been identified, either archaeologically as subsurface remains, or as visible traces in the upstanding masonry.

The character of Caldwell Tower’s fabric – particularly internally – is also unconvincing, and it seems more likely that Caldwell Tower represents a relatively recent attempt (by this, we’re talking late eighteenth or early nineteenth century) to create an impressive landscape feature in the style of a much earlier structure. That this later building makes use of stonework derived from the earlier fortified structure seems quite plausible, though whether this now-vanished building actually stood in this precise location is uncertain.

The tower has three storeys. There is a vaulted cellar, accessed from the ground floor, with another two levels above, reached via an external forestair. The crenellated parapet was added in the 19th century.

The structure, which has now been restored and transformed into a private residence, was featured in the Channel Four television series ‘The Restoration Man’.