Last night, I had the pleasure of presenting a lecture to Beith Cultural & Heritage Society on ‘The Lords of the Westland’: Some Ayrshire Families & The Rise of James the Third’. It considered the real historical events that are recreated in ‘Fire and Sword’, and looked at some of the individuals who feature in the novel, with John Sempill of Ellestoun and Hugh, 2nd Lord Montgomerie studied in particular detail. When the lecture was over, there followed a lively question-and-answer session on how fact had been transformed into fiction in the process of creating the book.

I had a lovely time there.  My hosts were extremely welcoming, and while I didn’t shift many books, I signed a few that had been bought previously, which was very gratifying!  It was a real pleasure to chat with future readers who were looking forward to getting into the novel, and who’d enjoyed this opportunity to get the facts presented to them before they embarked on the fictional version of the story.

I was also delighted to meet up with Ann McMillan, Honorary President of the Dorothy Dunnett Society, who’d travelled all the way up from South Ayrshire for the occasion.  A signed copy of Fire and Sword was purchased there on behalf of the Society – which is destined to be given out as a raffle prize at their annual dinner!  To receive this news is – as you may imagine – quite an honour!!

My next appearance will be on the 5th April in Paisley, where a veritable extravaganza of ‘Fire and Sword’-related activities will be taking place, including readings in the morning and a lecture in the afternoon.  There will, of course, be a particular focus on Paisley and its abbey – the abbot at the time, George Shaw, was deeply embroiled in the coup and even fought at Sauchieburn for James IV.  For more information concerning dates, venues, etc. watch this space!!

In the meantime, copies of the book can be purchased locally at Abbey Books in Paisley, Beith Town Hall, Beith, and the Renfrewshire Witch Hunt 1697 Hub in the Paisley Centre, Paisley. 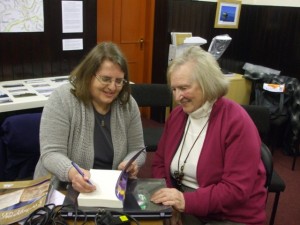 The author with Ann McMillan, Honorary Present of the Dorothy Dunnett Society